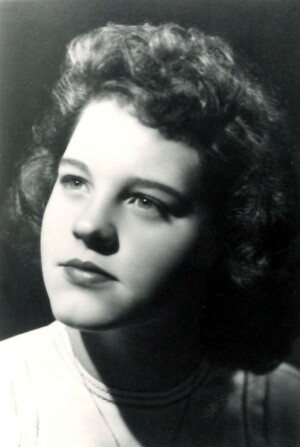 Beverly Ann Bridges died of natural causes at St. Alphonsus Regional Medical Center on January 11, 2022. She died peacefully with her daughter and step-daughter at her side.

Beverly as born in Denver, CO in 1929. She was the daughter of Frederick Leffler and Nelle Frye. The family made their home in Central City, CO and Idaho Springs, CO. After her father lost his employment in the mining industry, the family moved to Southgate, CA in 1940, where he gained employment at the Vultee Aircraft Company. The family moved to Whittier, CA in 1943. Beverly graduated from Whittier High School in 1947.
Beverly got a job at a local café early in life and later worked at Sears in Los Angeles. She also attended college in East Los Angeles. While working at Sears, she met Adolph Henkel who was working there as a commercial artist. Beverly and Adolph were married at St. Mary’s Catholic Church in Whittier, CA on August 14, 1949. They had two children, Edward and Jeanne.

They choose the town of Newhall, CA (now Santa Clarita) to raise their children. They soon built their first house and later a larger one on a hill in Newhall. Beverly was employed at the Circle J Ranch as a bookkeeper and waitress. It was a dude ranch for the Hollywood elite and Beverly met several famous actors while working there. She later got a job as the bookkeeper at Newhall Electric where she would work for 20 years.

Beverly and Adolph divorced in 1966. They sold the house on the hill and Beverly moved with her two children into a condominium in Newhall. She lived there until her children were grown. Beverly and a close friend, Laree Stock, invested in the purchase of a Hungarian restaurant in Santa Barbara, CA. Unfortunately, this was a failed venture but it resulted in Beverly relocating to Santa Barbara where she gained employment at the Josten Ring Company. As Beverly loved the ocean shore, this was one of her most favorite places she lived. Beverly and Laree also owned a cabin in Camp Nelson, CA together.

While still in Newhall, Beverly had been introduced to Alva Bridges by her friend Laree. Alva and Beverly began dating but they soon went their separate ways. But while she was living in Santa Barbara, Alva began corresponding with her. They rekindled their relationship and were married in Santa Barbara on April 18, 1981.

When the Josten Ring Company closed, Alva and Beverly moved to St. George, UT where she bought a home. Beverly got a job working as a receptionist at Gunn Chiropractic. Beverly’s mother Nelle purchased a condominium in St. George and Beverly looked after her. She and Alva took many trips together to visit Beverly’s children and Alva’s children. In 1991, Alva and Beverly purchased a mobile home in North Las Vegas, NV. Later they were able to move the mobile home into a mobile home park near Tropicana Blvd. At that time, Beverly took her mother into her home to care for her until her mother’s death at age 100 in 1998.

Alva had died in 1996, and after her mother’s death, Beverly went back to work. She was employed as an assistant at Option Care in Las Vegas. Eventually Beverly completely retired at age 79 and lived on her own in Las Vegas. She enjoyed visiting the casinos with her friends and visitors.

Wanting to be closer to family, Beverly moved to Boise, ID in 2013 and bought a mobile home in the Aspen Creek Mobile Home Park. For almost nine years she enjoyed being close to her daughter’s home and her granddaughter and her family. One of her step-daughters also bought a mobile home down the street from her in Aspen Creek. This is where she would spend her remaining years.

Arrangements are being made with Cloverdale Funeral Home. Interment will be at Cloverdale Memorial Park.